"Alone we can't do much. Together we can change the world." - William F. Austin

Showcasing Stories of Positive Impact Around the World 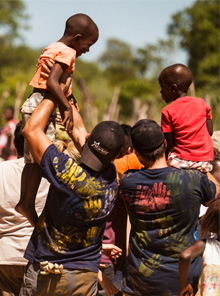 Operation Change takes viewers around the globe as it examines some of the world's most challenging issues with some of the organizations that are attempting to help bring positive change.

The series follows Bill & Tani Austin and their son, Steven Sawalich, from Starkey Hearing Foundation, a global, non-profit organization that gives free hearing aids to those in need, as they are joined by celebrities and philanthropists to tackle some of the most challenging issues plaguing our world today.

The series features philanthropists joining forces, including former President Bill Clinton, Sir Richard Branson, Sir Elton John and many others as they travel to some of the most dangerous and poverty-stricken places in the world.

From the West Bank of Palestine to the wilds of Papua New Guinea, this raw documentary series reveals the untold stories of some of the world's greatest heroes.

Find out what it takes to tackle some of the world's more challenging issues.